Within the past ten years the American Academy of Dermatology (AAD) constructed a survey of five hundred individuals between the ages of 18-50, 24% reported having a tattoo. Of these individuals, 16% had gotten their first tattoo by the age of eighteen. Today, however, 17% of them have considered getting their tattoo removed, but none have actually gone through with it.

Whether the reason for garnishing your skin with ink is impulsiveness or personal expression, tattoos over time can become regretful. Those with unwanted ink can testify that the meanings behind their tattoos may become no longer significant. Not to mention the price and pain associated with getting a tattoo removed. That once vibrant tulip located on your hip, the initials of your high school boyfriend on your wrist, or the tattoo of your favorite quote from spring break that takes up your entire rib cage are all constant reminders of how permanent tattoos really are.

For it being such a popular fad, many of us know very little about tattoos. The risks associated with getting one are both dangerous and painful. If you have never gone under the needle before here are a few threats linked to getting inked:

Allergic Reactions – Tattoo dyes, especially blue, red, green, and yellow, can cause allergic skin reactions resulting in an itchy rash around the area of the tattoo.

Bloodborne Diseases – The equipment used to create your tattoo can be contaminated with infected blood from the previous client, making you susceptible to disease. These diseases include tetanus, hepatitis B, and hepatitis C.

Skin Infection – Small bumps called granulomas sometimes form around the ink of the tattoo that can develop into keloids, or raised areas of overgrown scar tissue. Tattoos have also been known to cause redness, swelling, and even pus-like drainage of the site.

Cancer Risk – Several chemists have identified low levels of carcinogens in tattoo ink. In the tattoo removal process the pigment is scorched with heat, triggering chemical reactions to generate carcinogenic products absorbed by the body.

A new FDA warning was just released warning people not to be tricked into getting the “safe” and temporary alternative, a henna tattoo. Permanent tattoo ink is injected into the skin, whereas henna tattoo ink is applied to the skin’s surface. The most popular henna “black ink” often contains a coal-tar hair dye containing p-phenylenediamine (PPD). This ingredient can cause dangerous skin reactions. By law the ingredient PPD, because of the severity of it’s harmful factors, is not even permitted in cosmetics. Serious and long-term reactions have been reported which include redness, blistering of the site, raised lesions, loss of pigmentation, sensitivity to sunlight, and permanent scarring. Reactions can appear immediately or take weeks to show.

So if you feel the risks aren’t enough to deter you, think about how unattractive tattoos look on more “mature” skin. It’s not always pretty! 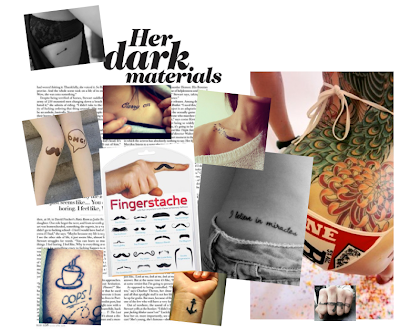