Should all skin cancer patients be taking nicotinamide?

In 2014, I began taking care of a patient (see photo) who had developed over 25 basal cell carcinomas on her lower legs, which were surgically removed. Given the results of a 2015 study by Chen et al. on the protective effects of nicotinamide in the prevention of nonmelanoma skin cancers, I began her on oral nicotinamide, 500 mg twice daily. She has been clear of any skin cancers in the last 2 years since starting supplementation. 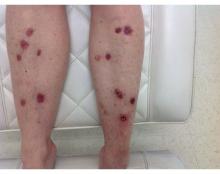 A patient with over 25 basal cell carcinomas on her lower legs, before treatment and starting nicotinamide as preventive treatment.

Nicotinamide, also known as niacinamide, is a water soluble form of vitamin B3 that has been shown to enhance the repair of UV-induced DNA damage. Nicotinamide is found naturally in meat, fish, nuts, grains, and legumes, and is a key component of the glycolysis pathway, by generating nicotinamide adenine dinucleotide for adenosine triphosphate production. Nicotinamide deficiency causes photosensitive dermatitis, diarrhea, and dementia. It has been studied for its anti-inflammatory benefits as an adjunct treatment for rosacea, bullous diseases, acne, and melasma.

The recommended dose for nicotinamide, which is available over the counter as Vitamin B3, is 500 mg twice a day. Nicotinamide should not be confused with niacin (nicotinic acid), which has been used to treat high cholesterol and cardiovascular disease. There are no significant side effects from long-term use; however nicotinamide should not be used in patients with end-stage kidney disease or chronic kidney disease. (Niacin, however, can cause elevation of liver enzymes, headache, flushing, and increased blood pressure.) Nicotinamide crosses the placenta and should not be used in pregnancy as it has not been studied in pregnant populations.

Shop our favorite skincare and more on Derm to Door.com!

Head back to our blog here!

Get Social! Share Should all skin cancer patients be taking nicotinamide?

Learn about the latest technologies and trends in skin care at McLean and Potomac Dermatology!

View our special offers at McLean and Potomac Dermatology!